We are the only company in the world to have ceramic transparency and densification technology.
Our ceramics that make use of its technological capabilities are used as key device for X-ray astronomical satellite "Hitomi" that elucidates the origin of the universe and laser satellites that are being deployed in various fields such as manufacturing and medical treatment.

"Hitomi", which was jointly developed by the Japan Aerospace Exploration Agency (JAXA) and the National Aeronautics and Space Administration (NASA).
It was developed to measure the elements in the universe and their velocities by accurately detecting the extremely precise X-rays coming from the universe, and to investigate the origin of the universe.

Cooling storage material GLF (GdLiF4) is a magnetic material that can produce an extremely low temperature about 0.5K (-272.5 ° C) in an adiabatic demagnetization refrigerator.
Our GLF was installed in the freezer of the soft X-ray spectroscopic detector (SXS) mounted on the X-ray astronomical satellite "Hitomi" (ASTRO-H) due to this excellent property.
A letter of appreciation was awarded by the Japan Aerospace Exploration Agency (JAXA) in 2016 for its contribution to the realization of the soft X-ray spectrometer onboard the astronomical satellite "Hitomi".

We can bond YAG ceramics with different dopant ions.

With the recent progress of microscopic photonics, a small microchip laser with peak output of MW-class has been developed, and our bonded ceramics are expected to be used in a wide range of fields as the laser medium.
By integrating the laser medium and supersaturated absorber with our bonding technology, alignment adjustment is unnecessary, and a compact yet high-pointed pulsed laser is realized.

We are working in cooperation with the industry, government and schools, so that we can expand these technologies into various fields in the future. 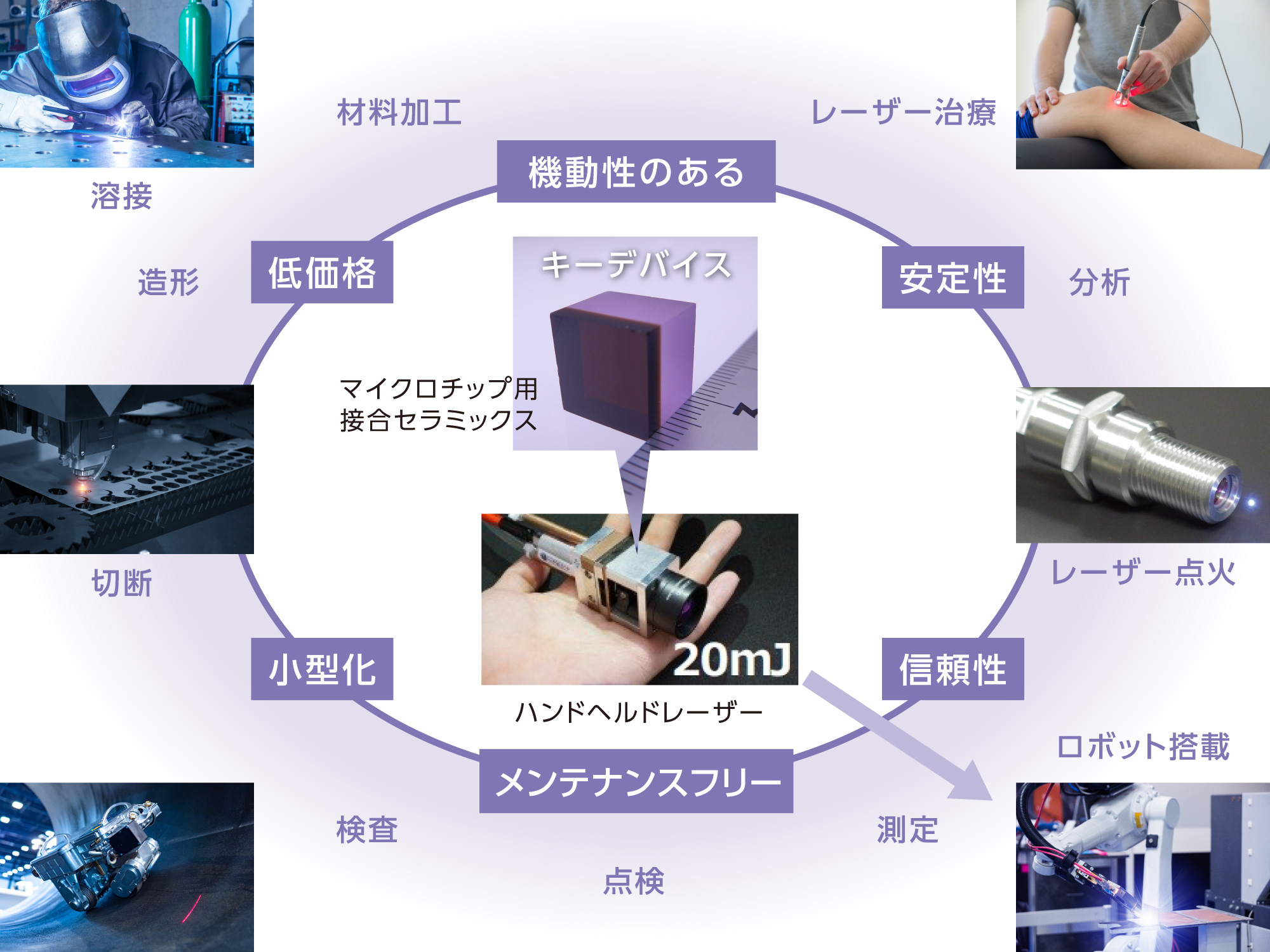 Currently, spark ignition methods are the mainstream for gas engines, but new ignition methods are being developed for the purpose of improving combustion efficiency and reducing harmful unburned fuels such as NOx and SOx.
There is a "laser ignition system" as one of the new ignition methods, and our bonded ceramics are used as the laser medium of the spark plug.
By using bonded ceramics, it is expected that pulse operation will be possible as one crystal and that there is a possibility of practical cost due to mass productivity of ceramics.

Our transparent ceramics can produce large-sized crystals that could not be realized with single crystals.
Large ceramics made by bonding YAG ceramics with different dopants can also be manufactured.
We have technology which not only the size but also the shape such as round shape and quadrangle to meet the customer's requests.

Since we aim to create a clean energy for the realization of a carbon-neutral society and for practical use, our large-sized bonded ceramics are used in the "space Solar Power System" which is promoting research and development centered on JAXA and the "inertial fusion power generation system" that is promoting research and development at Osaka University and at other research institutes all around the world.

The "space solar power generation system" can realize highly efficient use of solar energy since it can receive an average of 5 to 10 times larger amount of sunlight in the space compared to the ground per year due to a benefit of sunlight which shines regardless of the weather, season, day and night.
It is a dream-like system in which our "YAG ceramic" uses sunlight from space as a laser oscillation medium and converts it directly into a laser to send energy to facilities on the earth.

The amount of heat exhausted on the ground is less than that of conventional power plants, and it is extremely clean and environmentally friendly, emitting almost no greenhouse gases, making it a truly next generation energy system. We are working on the needs of JAXA for practical use.

Fusion power generation boasts an amount of power generation that is incomparable to existing power generation systems, and is an extremely clean and environmentally friendly next-generation energy system that emits almost no greenhouse gases or radiation.
We are working on various needs of research institutes all around the world such as Osaka University and Rutherford Appleton Laboratory toward practical use from 2030 to 2040.

We can fabricate bonded ceramics for microreactor by combining the high workability of ceramics with our bonding technology.

The flexural strength is increased by using bonding technology that eliminates the surface boundary.
Furthermore, the design is enhanced by bonding ceramics with different colors.
Circular bonding is also possible.